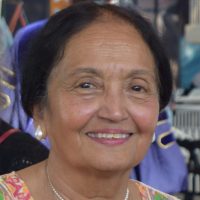 Dr. Varanasi retired as the science and research director of the National Oceanic and Atmospheric Administration’s (NOAA) Northwest Fisheries Science Center, a position she had held since 1994, when she became the first woman to lead a fisheries field office. With more than 30 years of service in NOAA, she has dedicated much of her career to applying chemistry to critical biological questions, advancing our understanding and improving regulatory, management, and public policy decisions.

After retirement from NOAA, she joined UW’s College of the Environment and co-taught a graduate seminar course on Coastal and Ocean Laws from 2012-1015. From 2011-2020, served as an advisor and a co-PI on Technical Cooperation in the Development of Predictive Capabilities on Marine Fisheries and Harmful Algal Blooms of the Indian Seas between the NOAA and Ministry of Earth Sciences, Republic of India. She serves on the steering committee of UW-led, multi-institutional program ‘Nature and Health’ to understand the connections between nature and human health that benefit people as well as natural ecosystems.

From 2004–2010, Dr. Varanasi served as the director of NOAA’s Westcoast Center of Excellence for Ocean and Human Health which was dedicated to studying how degradation of oceans and aquatic ecosystems can affect the health and well-being of people. From 2007–2010, Dr. Varanasi also served as the lead for Department of Commerce (through NOAA) on the executive committee of the West Coast Governors Agreement on Ocean Health. From 2008–2011, She served on the inaugural science panel for Puget Sound partnership.

Dr. Varanasi’s research on how marine organisms accumulate and process contaminants has led to the development of techniques and methods used by staff scientists to inform on the impacts of oil-related pollution on fisheries resources and ensured that seafood is safe for human consumption. During the 1989 Exxon Valdez oil spill in Alaska, these techniques were valuable in helping NOAA scientists provide information quickly to concerned Alaskans on the safety of their seafood, while increasing understanding of the interactions between fish and contaminants in their habitat. Based on their widely recognized expertise in oil spill detection and rapid analysis, Dr. Varanasi and her team of scientists were at the forefront of the agency’s seafood safety response after subsequent environmental disasters, including the Persian Gulf War, Cosco Busan, and Deepwater Horizon oil spills and Hurricane Katrina.

She has published over 150 articles in journals including Nature and Science and edited two books:

Other appointments:
Distinguished Scholar in Residence, UW Center for Urban Environments and College of the Environment
Affiliate Faculty, UW Chemistry department and the UW Law School