The School of Aquatic and Fishery Sciences has a distinguished and colorful history going back 100 years, spanning several directors and identities.

The Impetus for a Fisheries School at UW

In 1913, the Commissioner of the United States Bureau of Fisheries, Hugh McCormick Smith, noted in an address to the American Fisheries Society that there was no higher education institution in the United States that offered training in fisheries-related subjects.

A year later, Smith advocated strongly for the University to establish a school of fisheries or offer some related courses. He aptly noted that vast opportunities existed for people trained in fisheries and that UW’s proximity to the fishing industry provided a perfect location to establish a school dedicated to the study of fish.

Five years later, in April 1919, the UW College of Fisheries was born, the first fisheries college in the United States, with John Cobb as its director. Cobb had been editor of Pacific Fisherman and a former field agent for the US Bureau of Fisheries. During his tenure, the academic focus was on fishery technology, with courses on fishery products and cannery management. Cobb’s first faculty hires included experts on aquaculture and fishery technology.

From its inception in 1919 when 13 students joined the program, the School quickly grew, enrolling more than 100 students by 1928. In 1930, Cobb encountered some health issues and met with an untimely death. At the same time, the UW underwent administration changes, and the future of the College of Fisheries became precarious. The new administration dismissed all but one Fisheries faculty, who was assigned to the College of Science. Impassioned students enrolled in the program protested, and a formal inquiry led to the establishment of a Department of Fisheries within the College of Science.

The Department of Fisheries was led by William F. Thompson, a renowned fisheries biologist, who revised the curriculum to emphasize basic science and fishery biology. Thompson wanted graduates to be well rounded and have the skill set to teach or pursue continuing education.

The financial hardship arising from the Great Depression made it hard to hire full-time faculty for the Department, and it survived with just a few faculty. UW also reorganized its administration again, which led to a new identity for the department: The School of Fisheries. A few years later, the country was in the throes of World War II, and student enrollment declined, but then rose again after the war ended.

After the war, the Fisheries Research Institute (FRI) was formed as a result of growing concern over dwindling Alaskan salmon resources. FRI was initially housed within the UW Graduate School. FRI researchers set up field study sites, at first studying the biology of red salmon in Bristol Bay, and over the years, expanding their research in scope and geographical area. This ongoing research brought respect and renown to the University. In 1958, FRI administration was moved to the newly re-established College of Fisheries. 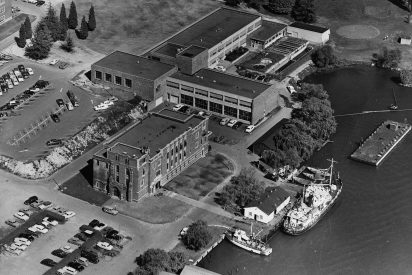 Thompson had a major impact on the School’s growth, and three of his students successively served as director after his tenure (he retired in 1958). In the 1960s, research funding by the federal government increased, as did the size of the faculty and student body and the number of grants and contracts awarded to support graduate students.

The 1970s brought record student enrollments, probably due to a surge of baby boomers reaching college and graduate school age. In 1972, Title IX was passed, and the number of female faculty members started to slowly increase, reaching a peak in 1990, with nine women on faculty. The first woman chair, Marsha Landolt, was appointed in 1991. During the 1980s, the School’s foci evolved from seafood technology and processing methods to environmental studies, fish propagation, and aquaculture. In the 1990s, conservation and restoration of ecosystems, studies of the effects of environmental change on fisheries, and molecular biotechnology were added to SAFS research studies and curriculum.

The School’s foci evolved from seafood technology and processing methods to environmental studies, fish propagation, and aquaculture. In the last couple of decades, conservation and restoration of ecosystems and studies of the effects of environmental change on fisheries were added as well. In 2000, the expanded breadth of studies led to a new name for the school: The School of Aquatic and Fishery Sciences.

Today, there’s a renewed emphasis on undergraduate education and a broad array of research areas that affords students and faculty the opportunity to build their expertise, explore their passions, and contribute to the global knowledge of fisheries management.

View the School’s historic timeline to read about the history of SAFS in more detail. Former Director Robert R. Stickney’s 1989 book, “Flagship: A History of Fisheries at the University of Washington” (Kendall-Hunt Publishing Company), forms the basis of the timeline content from the School’s inception in 1919 through 1985. The content after 1985 lists developments that have occurred since Stickney’s chronicle.

Aquatic and Fishery Sciences is an open major. Learn more about how to plan and apply.