Three SAFS researchers have become principal investigators on two of the School’s long-term projects. Although new to their positions, they are not new to SAFS. Rebecca Buchanan and Jennifer Gosselin are the recently appointed PIs at Columbia Basin Research (CBR). Both came to CBR after earning doctoral degrees (Rebecca 2005; Jennifer 2015) and completing postdoctoral research. Jason Toft works on the Wetland Ecosystem Team (WET), where he has been a research scientist since obtaining his MS degree at SAFS in 2000. 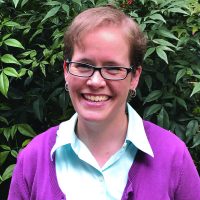 After Rebecca earned an AB in Mathematics, she explored teaching secondary school math, but it was not a good fit. However, it was her first real experience with probability and statistics, which she really enjoyed. Since childhood, she had been interested in both ecology and the environment, so Quantitative Ecology & Resource Management (QERM) was a natural fit‚ a unique program that combined her two primary interests. “I found the work fascinating (and fun!) and the people friendly and supportive,” she said.

At Columbia Basin Research (CBR), Rebecca helped develop analytical tools for interpreting tag data from large salmon and steelhead studies in the Columbia and Snake river basins. She also helped develop a branching model to estimate cohort survival of juvenile fish moving out of estuaries into the mainstem river. These programs were inspired by real needs of fisheries and hydropower managers and were collaborative efforts with others at CBR—including founding PI John Skalski, programmer Jim Lady, and analyst Rich Townsend.

In recent years, Rebecca has focused on monitoring survival of juvenile salmon and steelhead through the Joaquin River Delta in California. She said that efforts to improve survival by modifying water project operations have had surprisingly little benefit for salmon coming from the San Joaquin River, although there is considerably more potential for steelhead.

Rebecca found that installation of a temporary rock barrier to block off one of two major migration routes can help steelhead get through the system—it appears that the benefit of the barrier is the diversion of water into an accessible route. Surprisingly, the barrier does not appear to help the salmon, perhaps because their survival is much lower overall.

As a new PI, Rebecca looks forward to working with students in SAFS and QERM. She and Jennifer Gosselin are also talking about how they can engage the wider public—school students and interested citizens—in learning more about salmon in their local communities. She said, “This type of outreach helps inspire future scientists and decision-makers, who we will need if we are to maintain and restore native fish populations while meeting clean energy goals to combat climate change and support our economy.”

Outside of work, Rebecca has been singing in the Seattle Choral Company (SCC) since 2001. She said, “The SCC has provided both a musical home and a warm community that I treasure.” 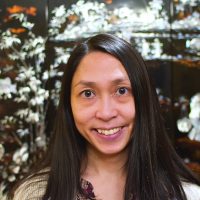 Jennifer came to SAFS for her PhD to study with Jim Anderson, working on a salmon project in the Snake and Columbia rivers. She said, “My eyes opened up to interactions across different habitats of the salmon life cycle and what part humans play in various stages.”

As a research scientist at CBR, Jennifer has been examining freshwater, marine, climate, biological, and anthropogenic indices with direct effects within life stages and carryover effects across life stages. She is also investigating which relationships may have worked well historically, which correlations are breaking down over time, and how one could interpret these changes in ecological research and decision-making contexts.

Jennifer noted that, “At CBR (founded by Skalski and Anderson), we make real-time data and models accessible to scientists, decision makers, managers, and the public through our website (www.cbr. washington.edu).” She now thinks deeply about access to information: who CBR aims to serve and how to do so in a respectful manner to strengthen relationships.

In her new role as PI, Jennifer co-directs CBR with Rebecca Buchanan. She is learning about how CBR has existed and adapted in the last three decades, and is thinking more broadly, given our current challenging times of the pandemic, inequities, and climate change.

Currently, Jennifer is co-chair of the SAFS Equity & Inclusion (EI) Committee. She said, “As each member [of SAFS] feels safer to give their best and their all, our School will be more fulfilled, vibrant, and richer in its scientific/educational contributions and community service. Imagine a space in which it is not only safe to ’fail forward,’ but where we are encouraged to do so. We learn from our mistakes and innovate more quickly.” She notes that it is important to maintain our efforts (see recent EI article).

Jennifer is fluent in English, French, and Vietnamese. Recently, through United Nations Online Volunteering, she translated a proposal about natural resource management in Burkina Faso from French to English, helping the authors reach a wider audience for potential funding. She hopes to continue connecting with people and cultures in which these languages are immersed. 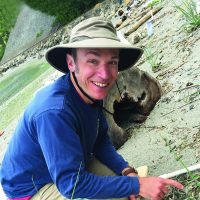 Jason Toft has been a research scientist on the Wetland Ecosystem Team (WET) since he earned an MS at SAFS in 2000. His research is focused along urban shorelines and the interactions of people and nature. One change Jason noted since he first came to WET is that, ”Many funders and collaborators are more concerned with topics of ‘applied science’ than when I started out.”

Over the years, Jason has become increasingly involved with funding and leading research activities. He said his new role as PI brings more responsibility for leading the lab and securing grants and “the freedom to pursue research interests, whatever they may be, and broaden WET’s collaborations with other groups.”

Charles “Si” Simenstad and Jeff Cordell were Jason’s main mentors over the years, doubling as his colleagues and friends. Jason is interested in continuing to mentor undergraduates in their capstone research, serve on graduate committees, give guest lectures, and offer research opportunities for students within WET laboratory and fieldwork activities.

Jason strives to involve volunteers from the community during fieldwork data collection. He said, “This addition of citizen scientists, in partnership with our UW students and staff, brings a perspective that is important in championing our work and building a network of concerned citizens, as well as academics and agency partners.” Jason added that WET researchers increased their collaborations with citizen scientist groups, especially as related to shoreline restoration in Puget Sound, by making monitoring protocols and data more available to non-academic scientists (shoremonitoring.org).

When asked what he does in his free time, Jason replied that he has played drums his whole life and that, “Even though my kids bang on them as much as I do nowadays, music will always be a part of me.”