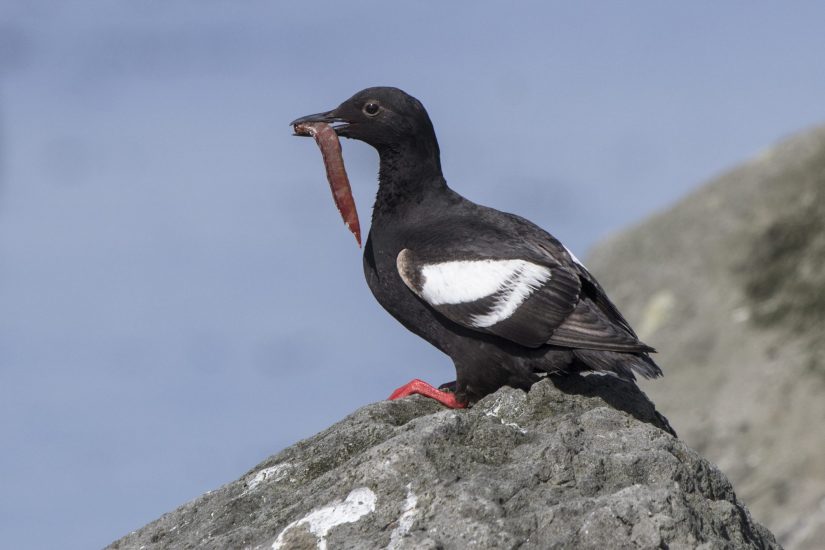 For nearly two decades, volunteers on Whidbey Island have been monitoring a curious little seabird—the pigeon guillemot, small in size, black with white patches on the wings and a fire-engine-red mouth and feet. Using binoculars, they observe and record the comings and goings of the island’s resident seabirds along the seaside cliffs.

Pigeon guillemots have been identified as a Puget Sound indicator species due to their abundance throughout the region, but what they might indicate is not yet clear. The long-running monitoring efforts on Whidbey Island, which have spread to other locations in Puget Sound, provide a unique opportunity for PhD student Amanda Warlick and Associate Professor Sarah Converse to collaborate with the Whidbey Audubon Society and a community of volunteers to uncover how these birds fit within the larger ecosystem.

Warlick explains that since 2002, the Salish Sea Guillemot Network monitoring program has collected a real “treasure trove” of information about the birds, including adult burrow attendance activity. Pigeon guillemots nest in the nooks and crannies along hard-to-reach shoreline cliffs, often inaccessible to people and well protected from predators. The volunteers carefully document when birds leave and return to their burrows and if they bring fish back with them. Researchers look at these data with the assumption that if the birds are taking a fish up to their burrow, it’s because they’re feeding their chicks. These observations, over multiple years, are helping to determine the reproductive output and ultimately the population sizes of the colonies.

“I’ve been so impressed going to Whidbey and seeing Frances Wood, one of the two founders of the program, and their team,” said Converse. “They work so hard as a group to train all their volunteers and they all take it so seriously. As a result, we can take these data and trust them and use them.”

Warlick’s goal is to create an integrated population model that brings together different data sources to inform their various research questions. Creating this type of model based on burrow attendance observations is new and would not be possible without this community science effort. This research will help us understand how many fledglings successfully emerge from burrows at the end of the summer every year and whether that number is affected by environmental conditions such as sea surface temperature.

“There’s a lot of excitement in the local community for these birds,” said Warlick. “It’s really interesting to see how involvement in this kind of project can create environmental stewardship—and not just create it, but then spread it. It’s built on a lot of heart. When you go out in the field with the volunteers, it’s clear that they have fallen in love with the pigeon guillemots.”