A front page investigative CNN article outlines how the Environmental Protection Agency reversed a decision to protect the most valuable salmon fishery in the world, giving the go-ahead for the Pebble Mine, one hour after the head met with the CEO of the Pebble Mine partnership. SAFS professor Thomas Quinn comments in the report: “This is the jewel in the crown of America’s fisheries resources – these salmon. If you don’t think this is worth saving, what is? To me, if you don’t draw a line in the sand here, there’s none to be drawn anywhere.” SAFS professor Ray Hilborn adds: “The reason it’s such a productive salmon place is, it’s basically this giant gravel bed. But that also means it’s almost impossible to contain water. It’s just a giant sponge. The idea you could store highly toxic waste (from a mine) forever behind a dam is just ridiculous.” The report highlights video footage by Jason Ching, SAFS research scientist, photographer, and award-winning film-maker. 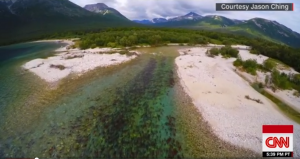