Suppose there is an endangered species of frog that is declining in abundance. A group of natural resource managers come together and ask, “what can we do?”

The answer? It depends.

While not the most uplifting of truths, it illustrates the challenges and complexity of these types of issues and the many factors that must be considered. 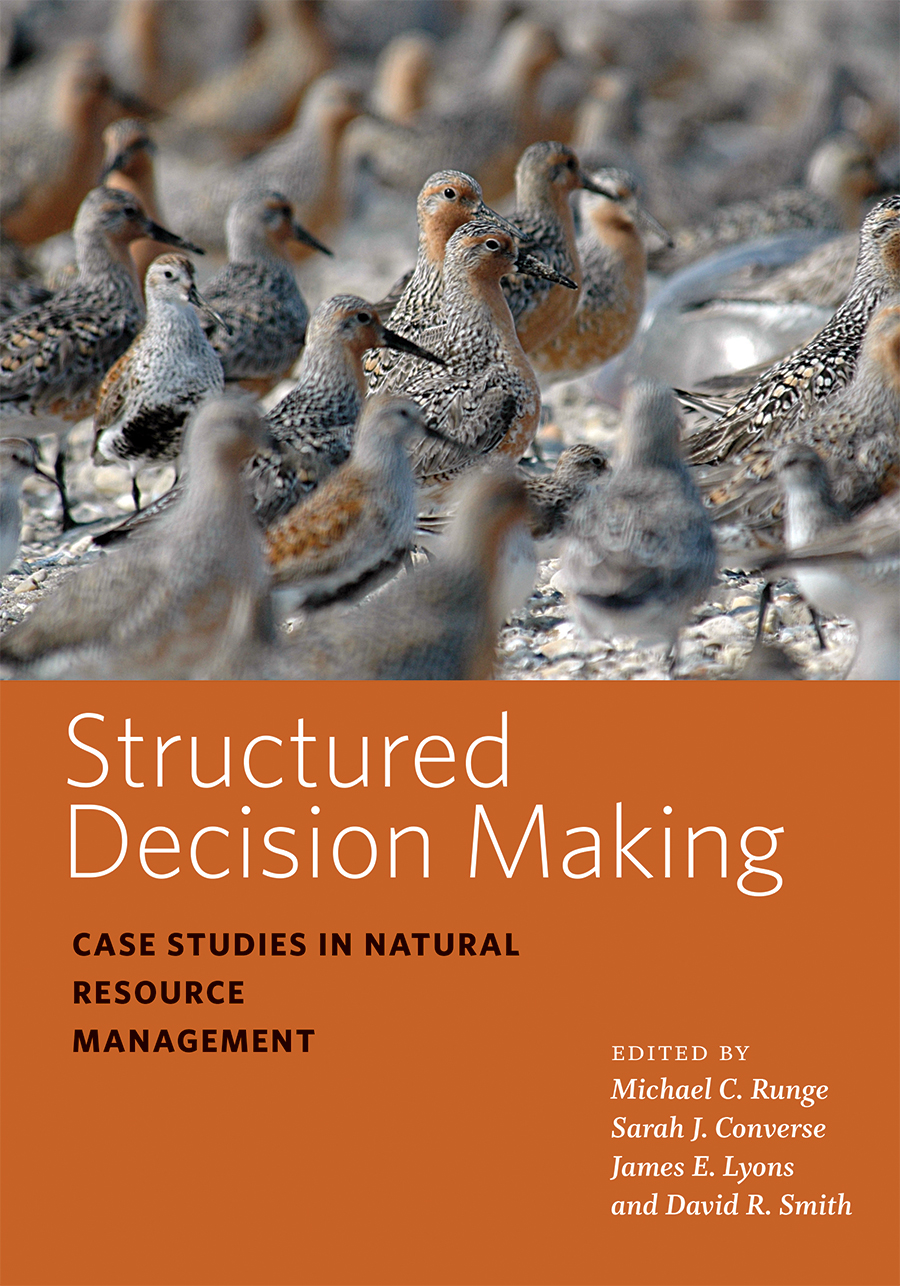 In their most recent book, Sarah Converse (unit leader, USGS Washington Cooperative Fish and Wildlife Research Unit, and UW associate professor in Aquatic and Fishery Sciences and Environmental and Forest Sciences) and her co-editors (Michael Runge, James Lyons, and David Smith, all of whom are scientists with USGS) explore how managers can learn to navigate such situations. They describe how a structured decision-making approach uses careful and organized analysis to aid in solving natural resource problems. Their book, “Structured Decision Making: Case Studies in Natural Resource Management,” was published in May by Johns Hopkins University Press.

Using the above hypothetical of the endangered frog, Converse explains the different approaches managers would use by identifying the possible desired outcomes:

Is the goal to determine whether this species of frog should be given federal protection? If yes, that is a particular type of decision that the U.S. Fish and Wildlife Service (USFWS) must make in the United States, subject to their own laws and practices.

Is the decision about what a state wildlife agency can do to conserve this frog species? If yes, then the decision is about how to use state resources in the most effective way possible to manage the species on the ground.

Or, is the question about how to conserve this species on private land? If yes, the decision is about how natural resource managers and their respective agencies and organizations could build effective partnerships with private landowners.

In each instance, Converse points out that the who, what, where, and when are different, and it is often unclear which decision is the right one to focus on at the outset. By examining the desired outcomes and issues carefully and independently within a comprehensive framework, it is possible to improve the quality of decision making.

It is definitely one of those concepts that is much more “show” than “tell.” You really have to see the principles and tools in action to develop an understanding of the power of structured decision making.

SAFS caught up with Converse for a conversation about this recently published book and how it may be used by decision-makers to tackle challenging issues.

How did you and the other editors identify the need for this book? Is it the first of its kind?

Back in 2007, we started running workshops in structured decision making at the USFWS National Conservation Training Center in West Virginia. For these workshops, we invited groups to work through real decision problems with experienced decision analysts over the course of one week. The reports that these teams wrote were so obviously an important teaching resource—demonstrating how to apply structured decision making to natural resource problems—we knew we had to get them out in an accessible form. Each of the case studies in the book arose from a real problem to which a group of people applied the principles of structured decision making.

The groups who worked on the case studies presented in the book were each composed of a combination of decision analysts, scientists, and decision-makers from management agencies, such as the US Fish and Wildlife Service, state management agencies, and others. What is important about this is that the case studies in the book by and large resulted in real decisions made by these management agencies—they weren’t just academic exercises. This is an important aspect of the book: it describes how these tools can be used in real situations where the stakes are high. 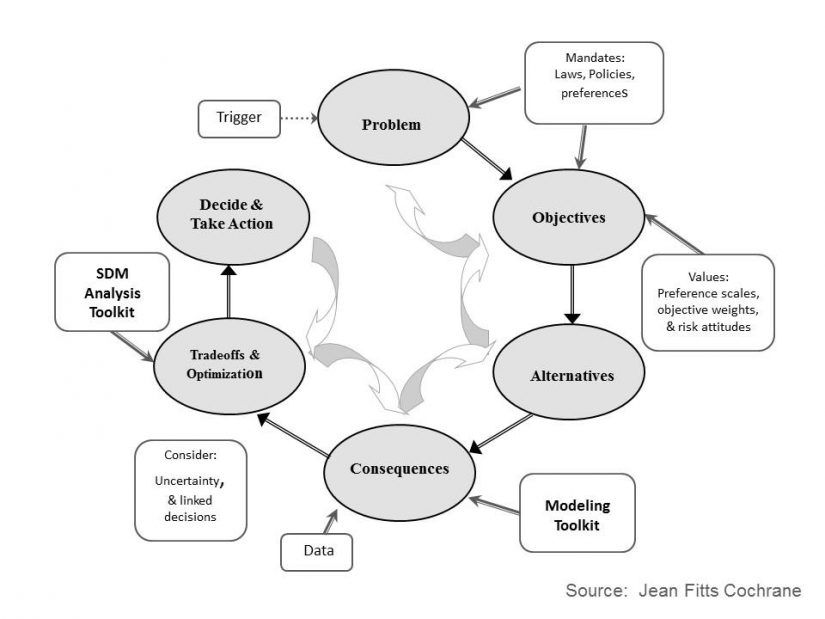 What is something new in the book that you would like people to know?

S.C.: It isn’t new exactly, but it is something that we have learned over the years: when it comes to solving hard problems in natural resource management, sometimes the biggest challenge is identifying the key decision or decisions to be made. There is so much complexity in the environmental problems we face that we can get stymied by all that complexity and end up stuck. Structured decision making is about helping people create a map to find their way out of the place where they’re stuck. The first step in creating that map is simply asking “Who needs to make what decision, where, and when?” If we can develop a really clear answer to that question, we’ve made a lot of progress. It turns out that answering that question is much more complicated than people realize.

Does this book work as a “template” to help decision-makers make unbiased decisions?

S.C.: Yes, the book is meant to provide a kind of template because all decisions are composed of a consistent set of components, and the trick is figuring out how to decompose the decision into those components. The idea of an “unbiased” decision is something I have to unpack. First, it is important to recognize that there is no such thing as an “objective” decision; all decisions are inherently subjective because we make them to achieve things we value, and values are inherently subjective. This is why science cannot tell us what to do (even though we hear this in common parlance all the time: When people say “X decision-maker is not doing what the science tells us to do,” that person is assuming a set of values that may or may not be held by that decision-maker. Science itself cannot tell us what to do because science doesn’t make statements about how the world “should be;” it makes statements about how the world is). The kind of “bias” that is counterproductive in decision making is when we let certain cognitive biases get in the way. For example, people tend to have a bias toward the status quo. They are familiar with it, so it feels safe, even when careful analysis would tell us that it is clearly suboptimal. Those are the kinds of biases we want to avoid, and structured decision making helps us do that.

Can you tell us some of the species and environments that have been impacted by this structured decision-making process?

S.C.: There are so many! Some of the case studies we cover in this book focus on whooping cranes, Mauritius olive white-eyes, fishes of the Great Barrier Reef, freshwater mussels, Indiana bats, and bighorn sheep. We also cover case studies that are focused on entire ecosystems, such as alpine peatlands, coastal wetlands, and large riverine systems. Something that we worked on close to home here in Washington is the South Sound Prairies ecosystem, where we considered how to build a network of reserves for several threatened species that inhabit that ecosystem, including the Mazama pocket gopher, the streaked horned lark, and the Taylor’s checkerspot butterfly.

What are some hurdles people will still encounter in natural resources decision making?

S.C.: So many things! Unfortunately, structured decision making doesn’t make hard problems easy, although it does give us a way through them. However, difficulties still remain: dealing with our natural cognitive biases, a perception that there isn’t enough time to spend thinking about a decision (the downside of this is that a lack of careful thought now can come back to haunt us later), real conflict, our natural tendency to be focused on solving the problem before we really know what the problem is…those are a few things that come to mind.

What was one case study that proved challenging, but was ultimately rewarding?

S.C.: All of them! Every problem I have ever worked on, at some point in the process, seemed really challenging. But similarly, I don’t think I’ve ever come out of a process and not felt like we had greater clarity about how to move forward.

Who is the target audience for this book?

To learn more about the book, read a recent JHU Press blog post by the editors.