As I was graduating with a MA in Biology at Long Beach State College, in early 1967, my growing interest about effects of water pollution on fish and fisheries led me to the UW and to Lynwood Smith. He agreed to take me on as a PhD student, and George Brown Jr. provided a federal graduate student fellowship. During two hot September days I drove up I-5 to Seattle, the start of a new adventure, including meeting my future wife.

Lynwood’s idea for the Kumtuks was simple: “take the lab to the fish.” It was not a self-powered research vessel, and hence not subject to the strict Coast Guard regulations for powered vessels. The vessel would be towed to field sites, anchored, and serve as laboratory, home, and social center for 4–6 students and visiting scientists. Students spent months as a team, capturing and studying the effects of stress on migrating salmon. During 1968 thru 1970, the Kumtuks was located at various sites including Neah Bay, Hood Canal (near Seabeck), Elliot Bay, and at the intersection of the heavily polluted east and west waterways of the Duwamish River.

Lynwood designed the 100 x 35 ft floating lab with a deckhouse that included a complete galley, several staterooms, and several laboratories for chemical and analytical equipment. The rear of the deckhouse was a large open wet lab containing large circular tanks, wet tables, a large fish anesthesia operating table, and a unique, eight-foot long plexiglass recirculating swimming respirometer that he built. The roof of the deckhouse included space for five floating docks, an 18-foot inboard/outboard fiberglass boat, two large net pens and a crane to raise and lower the topside equipment.

The lower deck, at sea level, was the engine room, fitted with duplicate diesel generators, all kinds of plumbing and electrical wiring, and other equipment required to keep the Kumtuks alive and well: below, diesel fuel and fresh water tanks.

The Kumtuks was towed to research sites by contracted tugboats or fishing vessels, including the R/V Commando. The half-dozen graduate students under Lynwood’s guidance conducted experiments to document the effects of stress on salmon. Once safely anchored on site, the team coordinated with other College of Fisheries salmon research teams in live capture of migrating salmon, holding them in the net pens secured to the stern of the Kumtuks. Fish were brought into the upper deck lab, anesthetized, and fitted with blood and/or urine catheters. Once recovered, individual fish were placed in the swimming respirometer and allowed to swim at various speeds and oxygen levels, with students sampling blood and urine for chemistry, blood physiology, nitrogen excretion, and other variables. During one set of experiments that started in freshwater, we watched as adult salmon reduced their urine flow as they encountered salt water.

On some occasions, Lynwood, a pilot, flew us to Kumtuks sites at Seabeck and Neah Bay. When not at field sites, the Kumtuks was tied up alongside the old gray Oceanography Barge, itself tied up alongside the College of Fisheries building, and during my last two years, it served as my “dorm.”

For day-to-day operations, maintenance, and safety, Lynwood hired marine engineer Peter Swierkowski, a 30-something lithe, sandy-haired man with a strong Polish accent. Pete could fix and repair anything mechanical or electrical, including my 1960 Nash Rambler. Pete brought his own history to the team…an immigrant escapee from fighting in Southeast Asia. He was also a philosopher: “How you fix your bed is how you sleep.” Ashore, I shared office space with colleague Gary Sakagawa (PhD, 1972), with whom, at La Jolla, I maintained contact for several decades.

My most extraordinary experience, one that remains with me today, was at the Duwamish station. I lived for months, onboard, at the intersection of the east and west waterways, busy with vessel activity, combined sewer overflows, low DO, stink, and what one colleague called “trutta prophylactica”. We coordinated with Ernie Salo (PhD, 1955; and SoF faculty member) and his students who intercepted and counted the huge incoming fall Chinook. Today the Duwamish is a lot cleaner, but the percent returns have dropped an order of magnitude! Go figure. 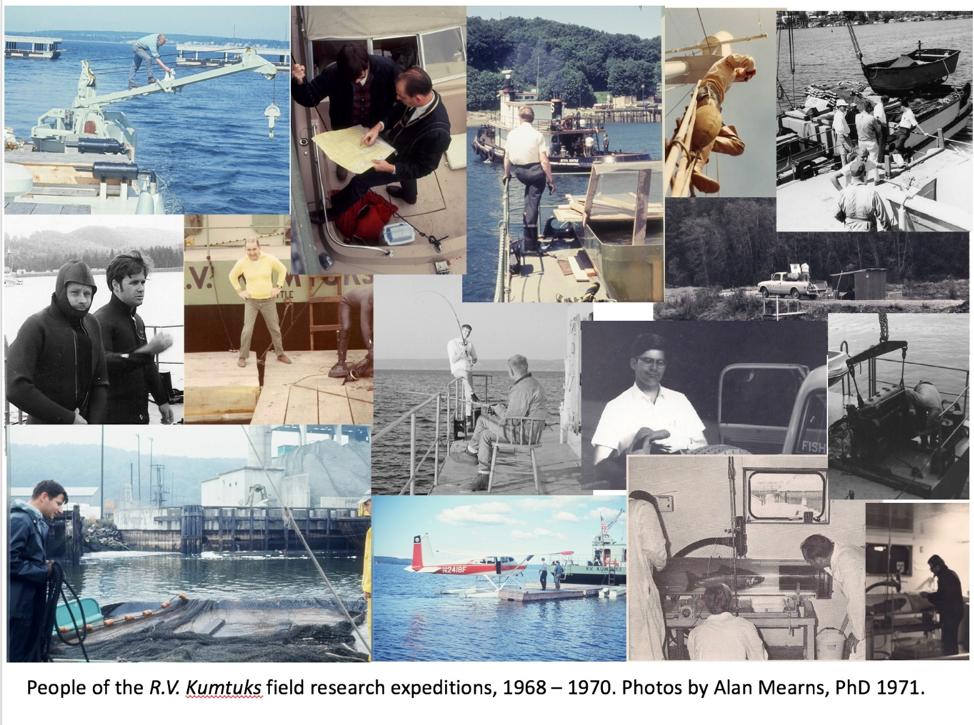 Ernie Salo helped me land my first post-PhD job in 1971: Environmental Specialist with the newly formed Southern California Coastal Water Research Project (SCCWRP) back in Los Angeles. In short, I graduated from Duwamish sewer overflows to move to the largest sewer outfalls on the Pacific Coast. Many College of Fisheries and FRI colleagues helped me with our studies on the effects of sewage on marine fish, and I am forever especially grateful to Bruce Miller (PhD, 1969; and SoF and SAFS faculty member).

In 2018, I retired after a 10-year career as a senior environmental specialist at SCCWRP, plus a 38-year career as ecologist with NOAA’s Puget Sound MESA Project and then the NOAA National HazMat Emergency Response Division in Seattle, supporting NOAA’s national scientific support coordinators during major oil spills, including the Exxon Valdez and the Deepwater Horizon. My most enduring friendship has been with Kumtuks colleague Rick Cardwell (MS, 1968; PhD, 1973), who became my “go-to” national expert in ecotoxicology and risk assessment.

I learned much more than science from my four years with Lynwood Smith, the Kumtuks, and fellow students, and SoF faculty—lessons that successfully carried through the rest of my career: think big; design your own approach to problems, challenge conventional wisdom, make lasting friends, and summarize what you learn in a single graphic.